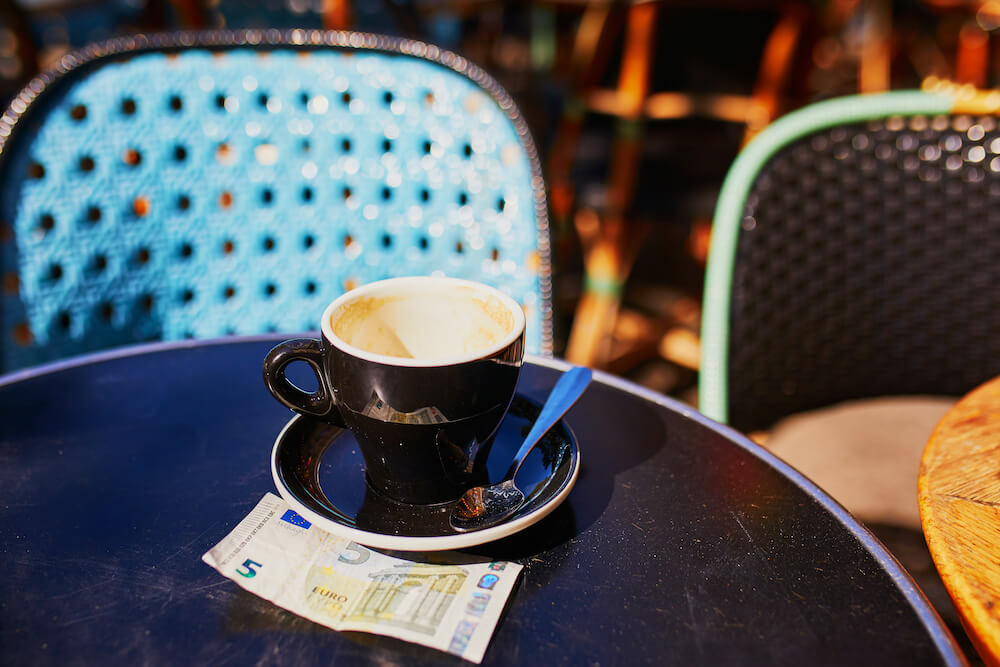 How much should I tip in Paris, France?

Tipping is always a bit confusing for Americans in Paris, coming from a culture where you are expected to tip for services, many are surprised to learn that generally tipping is not customary in France.

Tips are expected in America, but how much should I tip in France?

Given the frequency of this question, we thought it would be helpful to breakdown a few scenarios you are likely to encounter while traveling in Paris and France.

Tipping in Paris Restaurants
The service charge is typically included in the price; however, an additional 1 – 2€ should be given for excellent service.

Waiters in France are paid a living wage and this is done in part by having a service charge included on the bill. Even though you have no obligation to leave a tip, it is common for diners to tip 1 – 2€ as a gesture of kindness and also based on service after the service charge.

You should tip waiters and waitresses 1 to 3€ at a casual eatery or 5% of the bill for a fancier spot if the service charge isn’t included.

Tipping etiquette in Paris Cafés
This is a smaller gesture of gratitude, tipping in Cafés usually means leaving the change or some of it after purchase.

After having a drink people often leave the change. A common example might be purchasing a latte and snack for 4.75€ then simply leaving the .25€. If, on the other hand, your bill comes to 2.30€, you can simply leave an extra .10€ -.20€. The rule of thumb is if you can’t make the amount whole when you include the tip, then just leave an extra and take the change.

Tipping in Paris Bars
Similar to the Cafe, its common to leave a bit per drink or 5% of the bill as a tip at a nicer establishment.

When you’re visiting France it’s common to tip similarly to the Cafe. In the US for example, most people follow the $1 per drink and it’s different in France. Higher-end establishments where the drinks are 15€ or 20€ you might consider 1 – 2€ at the end.

Tipping Taxi Drivers
It’s nice to give small tips for great service but it isn’t expected.

Similar to how you will tip at restaurants, taxis expect tips around 1 – 2€ when they give great service. Did the driver help you with your bags? Did they point and described historic sights? Did they share general local knowledge about the city or area where you are staying? These are all questions you can ask to determine where on the 1 – 2€ scale you should tip. If the answer is “no” to all of these questions then 1€ is more than enough.

Tipping Private Tour Guides
Tips are not expected but a 10 – 20€ tip is regarded as a great tip or 10% of the tour price if it was absolutely magical.

Group and private tours are the best way to explore Paris. If you want to take it a step further, our company provides a wide range of unique private experiences to help you make the most of your time in Paris.

Tipping on group tours is not expected but it is common to give the guide 5 – 10€ depending on the number of people in your party. For private tours, it’s more common to give 10 – 20€. If you’re a larger group, consider tipping more.

Similar to the United States, a tip of 1€ per coat is generally expected. If there is not a designated coat check and the waiter help you with your coat a tip isn’t necessary but this helpfulness should be considered when tipping at the end of your meal.

Porter
It is not expected but appreciated to tip 1 – 2€ is highly appreciated if they help with your bags.

Doorman
It is not expected but appreciated to tip 1 – 2€ if they help you hail a taxi or something similar.

I’m so sorry if this is misleading… obviously there’s a difference if you’re meal is $25 or $250 -but it’s also true that most french people are not generous tippers. I typically leave 5-10% and I’ve been scolded for doing that (by my french friends). The point is, it’s left to your discretion since the waiters in France are paid (vs here in the US, where they rely on tips). 1-2 Euros for most meals, is what they do.